The Enilda waste transfer station is closing to save Big Lakes County money after a history of misuse at the site.

At its regular meeting Oct. 14, council approved a recommendation by administration.

Theft, vandalism and misuse at the site have led to the move to close the station that has been unstaffed and has no controls, says Vic Abel, director of public works.

The M.D. placed numerous cameras to attempt to control the site, which have either been stolen or destroyed, Abel says.

“The station has been used for not only just bagged garbage, resulting in constantly having the bins filled with other waste.

“Other items have been left on site that cannot be put in the bins and numerous hours have been spent cleaning up around the site.”

Enilda – Big Meadow Councillor Donald Bissell was the only council member to vote against the recommendation.

“Closing the site will make it worse,” says Bissell, who expects more waste to be dumped in ditches and other places.

“If they shut it down, they should keep track of costs to clean up ditches.”

Council passed a motion at its regular meeting June 26, 2019 that the Enilda transfer station be left as an unstaffed unsupervised site with the addition of recycling options for a trial period of six months.

“With the close proximity to both the Grouard transfer station and the regional landfill, closing Enilda would be cost effective for the county without having too great an impact on the residents of that area,” Abel says.

The county would save about $77,000 in annual operating costs, says a report to council.

Abel says many people are not following the rules on a large sign on the site.

A date to close the Enilda facility was not disclosed. 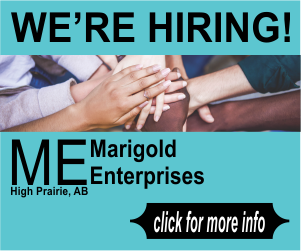