“People in rural communities should be concerned about it,” Reeve Ken Matthews says.

Big Lakes has joined other northern municipalities under Caribou Communities of Alberta to raise its concerns with the plan.

Under the federal Species At-Risk Act, the federal government requires the Province of Alberta to manage 65 per cent of critical caribou habitat by October 2017.

Earlier this year, the provincial government announced range management plans for Little Smoky and A La Peche herds and identified 1.8 million of hectares of land in northwest Alberta to be protected.

“They haven’t consulted us; we are opposed to the way it’s being done,” Matthews says.
“The group of municipalities wants a socio-economic study to find out how it will affect people and industry.”

He fears it could hamper forest management areas for Tolko.

No specified areas in the county have been identified by the plan.

Council will further discuss the issue at its next meeting Sept. 14, Matthews says.

The group says a report, by mediator Eric Denhoff, that the government accepted in June, could cost jobs and hurt the petroleum and forestry industries without doing much to protect the threatened animal.

“Areas they have set aside aren’t where caribou travel,” Matthews says.
“After the caribou, it could be the grizzly bear and that would affect the Swan Hills areas.”

Government is taking action to provide economic certainty for industries and workers who make their living in the north and to do what’s right to protect the animals, says a provincial government media release in June.

“Our government inherited a policy logjam and a looming federal deadline to file our plan to recover the caribou and manage critical habitat for caribou throughout the province,” Environment and Parks Minister Shannon Phillips says.
“Rather than admiring the problem, as had been done for two decades, our government took action.”

She acknowledged the work of Denhoff, whose recommendations are based on collaboration, science and protecting jobs.

A seasoned mediator with government, First Nations and the private sector, Denhoff was hired to engage stakeholders and provide advice and recommendations on a made-in-Alberta caribou protection strategy. 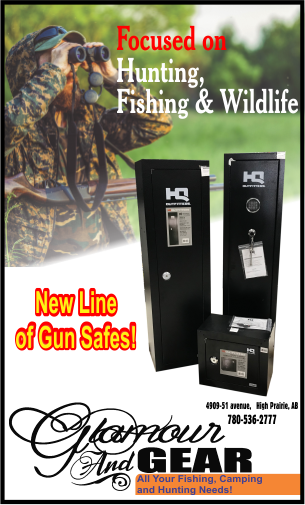